I love the series Humans of New York where the photographer takes a candid photo and then interviews the person behind the image. Their stores are absolutely fascinating. How many of our own stories with humans have we missed on a daily basis by having our faces stuck in our iPhones.) 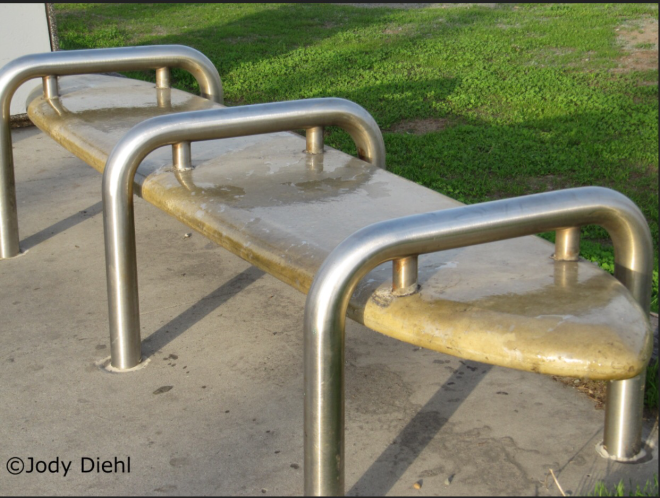 My Humans Of Miami Story

I was alone except for the tired restaurant worker still dressed in his work clothes sitting at the end of the bench with his head in his hands.

I pulled my straw hat down a little further to keep the hot noonday sun burning through the waving palm fronds off my face. I was waiting for the South Beach jitney to take me up to Lincoln Road where I planned to do some last minute Christmas shopping.

Suddenly this tiny little woman who had hurriedly crossed the street stood looking as though she wasn’t too sure where she wanted to sit, but then quickly plopped down beside me.

“Have you been waiting long?” she asked.

“No, but you know the jitney. It sometimes takes awhile for it to get here,” I replied.

She seemed very sweet, casually dressed, beyond middle-aged with her graying dark hair pulled back in a bun and small frizzy curls in front of her ears were let loose to fly a bit in the air. She looked like she could be someone’s sweet grandmother, I thought she probably was and was taking the bus back to Miami.

“Are you visiting?” I asked.

“No. I live here. My parents immigrated from Cuba when I was three years old. They were trying to escape the Castro regime. So I have lived in the states most of my life. Not always in Florida, because I went to New York to go to college. Then after college I moved to an apartment with some friends in the village and started working in the music business. Then after that we moved to Williamsburg and until I retired, I was involved with a large company that did a lot of the organizing for shows on Broadway. When I retired I moved back down here to Florida to be next to my son. Now I’m a chef for one of the private yachts in the marina here. The owner has a gluten sensitivity so it’s a challenge for me to try to create recipes without any ingredients that have gluten. But I’ve become pretty good at being able to do Cuban dishes and other dishes by substituting gluten-free products into those menus.”

We continued our conversation on the bus until she arrived at her stop. We exchanged business cards and she went on her way. She was such a fascinating woman. I was so wrong and have to claim stupidity in my initial narrow first judgement and impression of her. What I would have missed, not speaking with her! She was a well-educated, smart entrepreneurial woman.

The moral of my encounter is two pronged. Never judge a book by it’s cover and never miss a fascinating encounter by connecting with a fellow human, even if it is at the bus stop. What an interesting human story I would have missed had I not kept my iPhone in my purse.